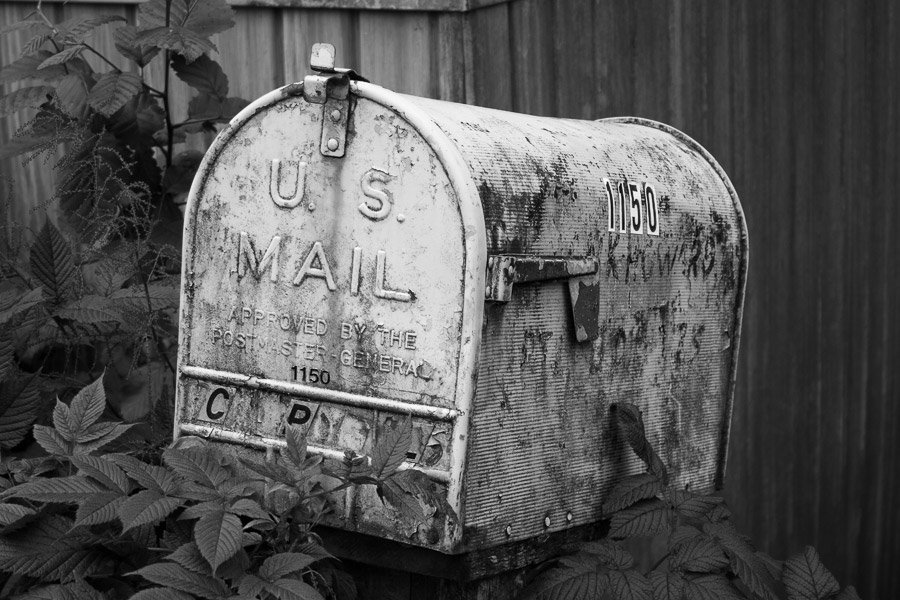 Editor's note: Our October sale is on! Get 30% off our all Lightroom Classic ebooks, presets and video course with the code ml30. Click here to learn more. Thanks for reading, Andrew.

This second effect is great news as you can use it to enhance any black and white photo.

You can use Clarity and Texture together if you want, but for the sake of simplicity we’ll look at them individually in this article.

Both Clarity and Texture are often more effective applied as a local adjustment. We’ll look at some examples of this below.

A couple of notes:

1. How to make better black and white photos with Clarity and Texture

A subtle boost to Clarity lifts most black and white photos. But images with lots of texture often benefit from a bigger increase in Clarity.

If you’re working with a flat photo you can also increase the Contrast to make the photo more punchy and impactful. Often it’s a matter of playing around with both sliders to find the best combination.

Let me give you an example. I made the photo below in flat light. As a result it lacks contrast (left). I set Contrast to +67 and Clarity to +100 in Lightroom Classic, giving the result on the right.

If we look at the result at 100% magnification we can clearly see how increasing Clarity has bought out the beautiful textures of the stonework.

The two photos below show the result of applying Texture instead of Clarity. The Texture slider affected the textures more, as you can see in the left photo (Texture +100). This just looks like badly done HDR (it’s more obvious when seen larger on my computer screen) and isn’t a good effect. In the right photo I set Texture to +20 and the result is better.

The best way to decide whether to use Clarity or Texture is to try them both, as I did here,  and see which result you prefer.

2. Texture in the black and white landscape

Here’s a black and white landscape photo that I made recently.

The grass and fence posts have interesting textures, and the overall photo is flat. I experimented with using Clarity and Texture to bring out the textures and add some contrast. Here’s the result.

As you can see, applying Clarity added contrast, and applying Texture didn’t. It shows how you can experiment with both settings to get different effects. In this example, I’m sure some photographers would prefer the photo on the left, and others the photo on the right. It all depends on whether you prefer your black and white landscapes to be punchy or subtle.

The Clarity and Texture sliders are global adjustments. Moving them affects the entire photo. This is useful to bear in mind when you’re developing images that use selective focus as part of the composition, like the one below.

In this particular photo it makes sense to apply Clarity to the mailbox, which is sharp and also the main focal point of the photo. The idea is to avoid applying it to the fence, which is out of focus and doesn’t have any important texture we want to enhance.

You can do that with the Adjustment Brush, creating a mask that looks something like this.

I set Clarity to +100, and also increased Shadows to compensate for the natural tendency of Clarity to make the photo darker. Here’s the result.

You can, of course, try this with Texture as well, or a mixture of the two.

Why does this work? There is a theory in photography called visual mass that states that certain elements pull the viewer’s eye more than others. One of these elements is sharpness. The eye goes to sharp parts of the image before it goes to unsharp, or out of focus areas.

You can use this to your advantage with local Clarity and Texture adjustments. This has the effect of increasing the relative sharpness of the main subject (the mailbox in the photo above) compared to the out of focus background. This in turn helps push the viewer’s eye to the parts of the composition that you think are important.

There’s another area where increasing Clarity or Texture locally can make a huge difference and that’s in portraiture. For example, you can use either the Radial filter or Adjustment Brush to enhance your model’s eyes.

Again, it’s a subtle, but often effective change. You can also do the same with your model’s mouth to emphasize the lips. Remember that as Clarity tends to make things darker, you’ll probably need to increase Exposure or Shadows a little as well to compensate.

With portraits of men you can often take this further and apply Clarity or Texture to the model’s skin. It’s a good idea not to overdo it, but used with a light touch Clarity and Texture can bring out the skin’s texture without overdoing the effect.

Portraits of men can be a lot of fun to develop in Lightroom Classic because, unlike portraits of women, it’s not conventional to apply skin smoothing. This gives you more freedom to play around with tools that enhance texture and boost contrast.

Here’s an example. For the second portrait (right) I used the Adjustment Brush to create a mask over the model’s face, as I didn’t want to affect the background. I set Clarity to +100 and Shadows to +100. Here’s the result.

Once again, you can experiment with the Texture slider as well to see which result works best for you.

So far we’ve seen that using Clarity to bring out texture is a key part of making good black and white photos in Lightroom Classic. But if you’re feeling adventurous and want to experiment with plugins you’ll find a whole new world opens up to you.

That’s because most black and white plugins have advanced tools for enhancing texture and bringing out detail. Let’s take a quick look at one of my favorite plugins, Silver Efex Pro, to see what options it offers.

In Silver Efex Pro the tool used to enhance texture is called Structure. It works in a similar fashion to Clarity in Lightroom Classic, except that there are three sliders called Highlights, Midtones and Shadows (plus a fourth slider called Fine Structure which applies it in a more subtle way.)

Each slider applies Structure to the corresponding tones, giving you a great deal of control over where and how it’s applied to your photo. This screenshot (a 50% enlargement) shows the result of adding Structure to the Midtones and Shadows of this particular photo (before is above the red line, after is below it).

Where to get Silver Efex Pro

Silver Efex Pro is part of the Nik Collection by DXO. You can download a trial or buy the software here.

Clarity and Texture are two powerful tools that make a big difference to most black and white photos by enhancing textures. You can also use the tools in plugins like Silver Efex Pro to create a similar effect. But don’t forget that most of the work is done when you press the shutter button. Photographing subjects with interesting textures lets you experiment with them in Lightroom Classic.

How To Make Better Black & White Photos With Local Adjustments

How to Use Black and White Profiles in Lightroom Classic

How To Bring Old Processes Back To Life...

Why Shadows Matter In Black & White

The Best Lightroom Classic Alternatives for Black and...

How To Dodge And Burn Black And White...

How To Develop Better Black and White Photos...

Bad ESPN portrait look – I love it! For some reason wedding photographers love to overuse Clarity (I’ve no idea why). But you have a lot more leeway in black and white than you do in color, which is why it can work so well.