How to Use the Transform Panel in Lightroom Classic 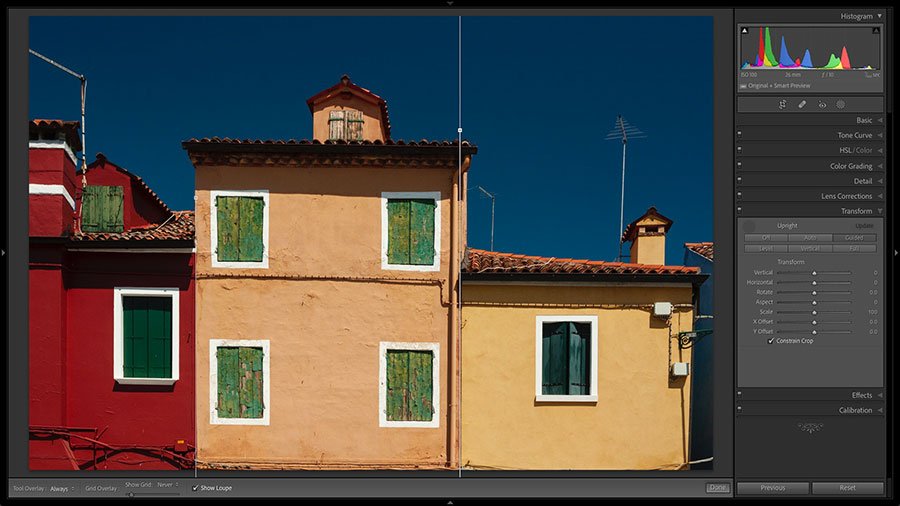 Editor's note: This month only – buy my new ebook Up Close: A Guide to Macro & Close-Up Photography for just $10 on my other website The Creative Photographer. Start making beautiful close-up photos today! Thanks for reading, Andrew.

In this article I’m going to show you how to use the Transform panel in Lightroom Classic.

If you’ve ever tried to make a photo of a building with a wide-angle lens you know how important it is to keep the camera straight. The slightest tilt distorts the perspective and shows in the photo. It’s a constant problem as it’s nearly impossible to hold the camera straight all the time.

This photo is a good example. I made it with a focal length of 17mm (on an APS-C camera). I had to tilt the camera back slightly to get more of the buildings in. As a result the buildings are distorted. It’s most obvious on the right where the green house looks as if it’s falling over.

Luckily, in Lightroom Classic you can use the Transform panel to correct the distortion.

Of course, you should aim to get it right in-camera as much as you can. The Transform panel is helpful but it also crops your image. It’s a good idea to leave extra space around the edges of the frame to allow for this.

Important note: The Transform panel is a feature in Lightroom Classic, but not Lightroom 6 or older. If you have Lightroom 6 you’ll find most of these tools in the Lens Corrections panel.

But before you go to the Transform panel, you should go to the Lens Corrections panel and apply Profile Corrections to your photo first.

That’s because most wide-angle lenses suffer from at least a small amount of barrel distortion. Barrel distortion is where straight lines appear to bend outwards, like the sides of the barrel. Sometimes the effect is so subtle you don’t see it until you apply a Profile Correction.

Under the Profile tab there are two boxes – Remove Chromatic Aberration and Enable Profile Corrections. Check these boxes and select the appropriate lens profile (if Lightroom doesn’t detect it automatically).

Lightroom Classic detects and removes any chromatic aberrations in your photo, and applies the lens profile to remove any vignetting and distortion caused by the lens.

If you’re not happy with the results you can use the Distortion and Vignetting sliders at the bottom to override Lightroom’s adjustments, or go to the Manual tab which gives you more options.

Note: If you see the message “Built-in Lens Profile applied” it means that Lightroom Classic has applied a built-in profile supplied by the software in your camera. There’s no need to check Enable Profile Corrections when this message is displayed – you won’t find a profile for your lens in Lightroom’s database anyway. This is most common with mirrorless cameras.

The Transform panel and the Upright tool

Once you’ve done this you can go to the Transform panel to use the Upright tool (marked below).

There are six buttons – Off, Auto, Guided, Level, Vertical and Full.

You’ll also see seven sliders under each button – Vertical, Horizontal, Rotate, Aspect, Scale, X Offset and Y Offset. You can use these sliders for adjusting Lightroom’s settings, or you can ignore the Upright tool completely and use the sliders instead. Most of the time though you won’t need to touch them.

Note: Lightroom 6 doesn’t have the Guided button, and has a different slider layout.

The first step is to press the Auto button to see if it corrects the distortion in your photo. Most of the time Auto does a great job and you won’t need to use any of the other buttons.

This is the result using Auto on the above photo. The image has been cropped slightly to make the correction, but it looks a lot better.

If Auto doesn’t do a great job, or if you’re curious, you can use the Level, Vertical or Full buttons to see if they give you a better result.

Level corrects any distortion in the left to right direction, but not up and down.

Vertical corrects distortion in both up and down and left to right directions. This is the button most likely to give you a better result than Auto.

Full applies the greatest level of distortion correction in every direction, but tends to apply an extreme crop.

You can also adjust the sliders underneath to if you need to. I won’t go into detail here as you’ll rarely need to touch them, and you can see the effect of each slider anyway when you move it.

Alternatively you can do it manually use the Guided tool instead. All you have to do is draw lines on the image to indicate where the straight lines are.

Let’s use the image below, with its converging verticals, as an example.

These screenshots shows how it works. In the first I drew a line along one of the converging verticals in the image. Lightroom displays a loupe allowing you to see precisely where you’ve placed the line (check the Show Loupe box in the Toolbar if you don’t see it).

Then I drew a second line on another vertical (both lines are marked in the screenshot below). You can draw lines along horizontal lines as well as verticals.

Once you’ve drawn at least two lines Lightroom automatically corrects the image. You can add more lines if you need to, but in this example the result was spot on. You can also use the sliders at the bottom to tweak the results.

Tip: If there’s white space around the photo then check the Constrain Crop box to eliminate it.

Extreme adjustments in the Transform panel

Finally, here’s an example of an extreme adjustment in the Transform panel. Let’s start with a photo where I used a wide-angle lens and deliberately tilted the camera back to create the converging verticals effect and photograph the tops of the colorful buildings against the deep blue sky.

I went to the Transform panel and pressed the Auto button, and this is the result. It needed a large crop, but the buildings are straight.

This could come in useful if you want to experiment with similar images.

How To Analyze Your Catalog With Lightroom Dashboard

Four Ways to Use the Lightroom Classic Histogram

How To Migrate From Lightroom To Lightroom Classic

5 Smart Ways To Use Virtual Copies in...

How to Use The SuperBlack Presets For Lightroom...

How to Tone Black & White Photos in...