Why Shadows Matter In Black & White 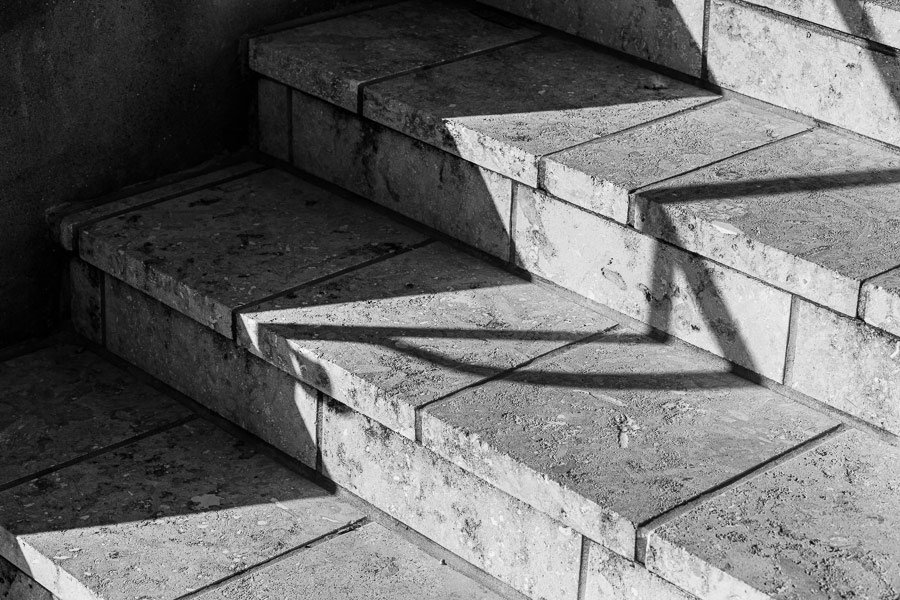 Most good black and white photos have shadows in the composition. Shadows are important because they add depth and show where the light is coming from. They can even add a sense of mood or mystery.

But shadows are often an afterthought when you’re in Lightroom Classic. Many photographers move the Shadows slider right to bring out all the detail. Others use HDR (High Dynamic Range) techniques to make photos full of detail.

But I’m going to challenge these ways of thinking. It’s time to embrace the dark side and start thinking about how dark you want your shadows to be. We’ll take a look at how this works in Lightroom Classic (with a little help from Ansel Adams).

Shadows in black and white photography

There are two decisions to make about shadows in your black and white photos.

1. How to use shadows in the composition. You make this decision when you frame the subject and press the shutter button.

2. How dark to make those shadows when you develop the photo. This is the part we’re going to look at today.

Let me give you a couple of examples of how this works. Take a look at these photos.

The first photo (left) uses dark blocks of shadow to create a graphic composition. Shadow is an important part of the composition.

The second photo (right) doesn’t have any shadows (except for under the lettering) but a large part of the image is dark. I’m showing you this photo to make the point that black and white photos can have dark tones that aren’t shadows.

In 1940 photographers Ansel Adams and Fred Archer developed the Zone System. The aim was to help photographers expose and develop black and white sheet film accurately.

The process involved visualizing how light or dark you wanted certain parts of the photo to be in the final print. That helped photographers make decisions about how to expose the film and develop it. The aim was to produce a good quality negative with a full tonal range that’s ideal for making a black and white print.

How the Zone System works

The Zone System divides the full range of tones (from black to gray to white) available in a black and white print to 11 zones.

You can divide the 11 zones into four categories: shadows, mid-tones, brights and highlights (see below).

It’s the shadows we’re concerned with for this tutorial. So let’s take a closer look at the five darkest zones. This is how Ansel Adams and Fred Archer define them. Originally they referred to the tones in a black and white print, but you can use them to describe what you see on your monitor.

Zone I: Nearly black. Some tonal differences visible, but no texture.

Zone II: The darkest part of the image that has detail. Some texture, depth and detail.

The definitions in the Zone System are useful because they get you thinking about the characteristics of the darkest tones in your photos. Now it’s time to see how we can put these ideas into action using some practical examples. Let’s go back to the examples I showed you earlier to get started.

I made this photo during a guided tour around a vineyard. Below you can see two versions of it. The first (left) is the one I showed you above. The shadow at bottom right is dark and doesn’t contain any detail (I set Shadows to -100 in Lightroom Classic to get this). It’s a high contrast photo that uses shadow as part of a bold, graphic composition.

For the second version (right) I moved the Shadows slider right to bring back some of the detail in that area. The photo has less contrast, but more shadow detail. Now the dark area bottom right falls into Zone III or Zone IV.

Neither approach is “correct”. I wouldn’t even say that one is better than the other. If this were your photo, the important question is how dark do you want the shadows to be? It’s your decision, and the answer depends on personal taste and what you want to achieve.

The second photo I showed you above doesn’t have shadows, but the metal is very dark. Here are two versions of the photo so you can see the difference that adjusting the brightness of the shadows makes. The first (left) is the photo you saw above. The shadows have plenty of detail and fall into Zone III or Zone IV in the Zone System.

For the second (right) I made the shadows darker, losing detail and dropping most of them into Zone I. Again, it’s a personal decision, but you can see how thinking about the shadows and how dark you want them to be makes a big difference to the photo.

Here’s another photo for you to look at. It’s a simple photo I made of a shadow falling across some steps. Here’s a high contrast version. Most of the shadows fall into Zone I.

Here’s a version with less contrast. I opened up the shadows to reveal detail. Now they fall into Zone III or Zone IV.

Again, how much you open the shadows in photos like these is up to you. The important thing is that you think about it and make a decision.

How To Make Better Black & White Photos With Local Adjustments

How To Dodge And Burn Black And White...

The Best Lightroom Classic Alternatives for Black and...

How To Bring Old Processes Back To Life...

How to Use Black and White Profiles in...

How To Develop Better Black and White Photos...