How to Use the Tone Curve Panel in Lightroom Classic 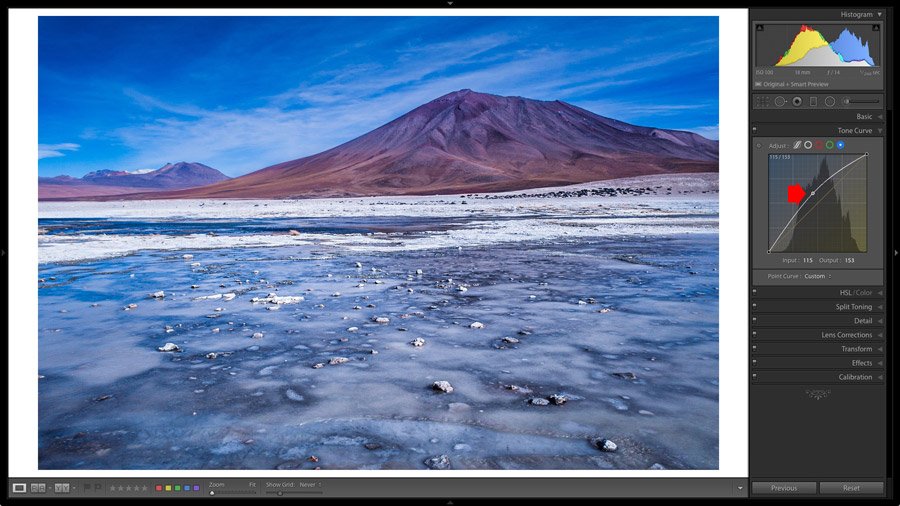 But it’s useful to know how to use the Tone Curve panel as it has several tools that the Basic panel doesn’t.

Note: Adobe updated the layout and design of the Tone Curve panel in the Lightroom Classic 9.3 (July 2020) update. If you’re using an earlier version of Lightroom Classic or Lightroom 6 the appearance is different, but it works the same way.

What is the Tone Curve?

The Tone Curve is a diagonal line that represents the tones in your photo from the darkest (bottom left) to the brightest (top right).

Lightroom Classic displays each Tone Curve over a histogram. The histogram is a graph that shows the tonal or color values in your photo on a scale of 0-255 on both the X and Y axis. This is a slightly different histogram than the one shown in the Histogram panel, so don’t get the two confused.

The Parametric and Point Curves make specific tones in your photo lighter or darker. You can also use them to adjust the contrast.

The color channel curves are for adjusting color values rather than tonal values.

This screenshot shows the Parametric Curve (left) and Point Curve (right) in the Tone Curve panel.

All the curves are in their default, or neutral positions. When the curve is a straight line it doesn’t have any affect on tones or colors.

Each curve has a different function, but they all work the same way. You can adjust the shape of the Tone Curve by adding and moving control points. This in turn alters the photo’s tones or colors.

Each Tone Curve already has two control points – one at the top right and the other at the bottom left. When you drag a control point to a new position, the curve moves with it.

This screenshot shows the Point Curve with its two original control points (left), one control point added (center) and three added (right). The active control point (one currently being moved or last one that was moved) is white, the others are black.

Working with the Point Curve

Click the gray circle at the top of the Tone Curve window to activate the Point Curve.

Click on the center of the Point Curve to add a control point. Drag the Control Point upwards to make the image brighter (below left), or downwards to make it darker (below center).

You can also increase contrast by adding two more control points to create an S curve (below right).

Working with the Parametric Curve

When you move a slider the graph shows you which part of the Tone Curve is affected. Below you can see the regions affected by the Highlights, Lights and Darks sliders.

To use the Targeted Adjustment Tool with the Point Curve or Parametric Curve:

The advantage of using the Targeted Adjustment Tool is that it lets you target the exact tones you want to adjust.

The Red, Green and Blue Channel Curves work in a similar way, except that changing the shape of the curve affects colors rather than tonal values.

For example, if you move the Blue Channel Curve up, the colors in the photo shift towards blue.

If you move the Blue Channel Curve down, the colors shift towards yellow.

Note: In Lightroom Classic 9.3 the interface changed and Adobe added colors to the display to help you visualize the color shift (below).

Use the Targeted Adjustment Tool for extra precision. For example, a Blue Channel Curve like the one below adds blue to the shadows but has a minimal effect on highlights. It’s a subtle effect that you might find useful for landscape photos or portraits.

You can also use them to add creative color effects, like those seen in Develop Presets.

The matte effect is where you use the Tone Curve to create a photo that looks like it’s printed on matte paper or taken on film. The idea is that the darkest shadows are gray rather than black.

Both Point Curves shown below create a matte effect. The further you move the left control point up the stronger the effect.

It works well with black and white photos.

You can use the technique with the Blue Channel Curve to shift the colors in the shadows towards blue at the same time. It’s common with portraits and fashion.

Finally, if you scan or otherwise digitize negatives you can use an inverted Point Curve to create a positive image.

This is what an inverted Point Curve looks like. All you have to do is click and drag the control points at the ends of the curve to their new positions.

This is what it does to your scanned negative.

Hopefully this tutorial has given you an insight into Lightroom Classic’s Tone Curve panel and some of the things that you can do with it. Not every photographer needs to use it – but it contains some useful tools if you need them.

How To Export Photos From Lightroom Classic

How To Use Noise Reduction In Lightroom Classic

How to Use the Transform Panel in Lightroom...

How to Create the Black & White Matte...

Are You Making These Seven Common Portrait Retouching...

How To Use The Texture Slider In Lightroom...

How to Retouch Portraits in Lightroom Classic

You might want to mention the Tone Curve tool menus that appear when right clicking (windows) the Tone Curve grid. The menus for the Point Curve and Parametric Curve tools are different. The Point Curve menu has the important “Snap to Grid” option which if enabled can cause points to reposition themselves unexpectedly when moving them.

Thanks for the tip, Sam.